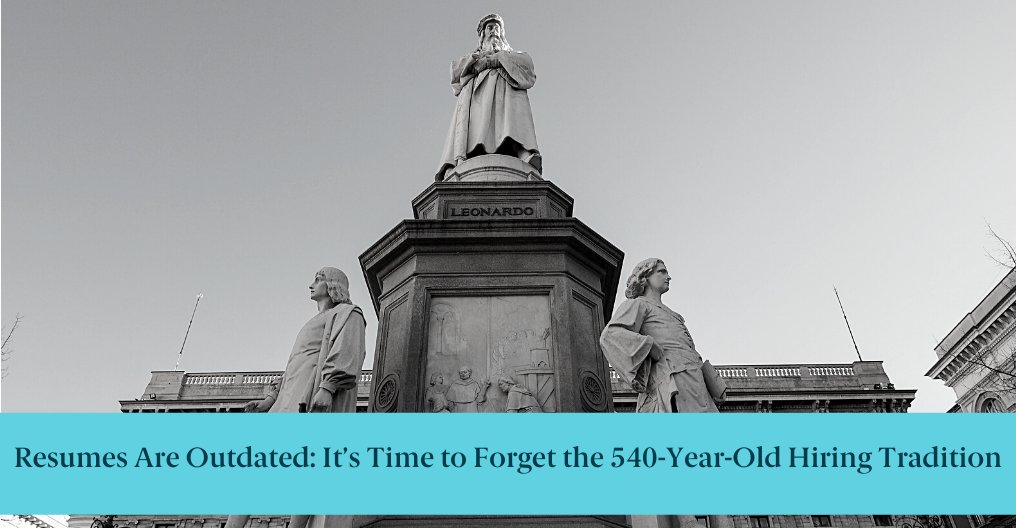 One…two…three…four…five…six…seven… While you were reading for those few seconds, the average recruiter decided whether or not a job applicant was fit for their role. Is it really fair to judge someone’s ability to succeed based on a single piece of paper, in that short amount of time? 540 years ago, the answer would have been “yes.” Now, two decades into the 21st century, that’s a whole different story. Continue reading as we discuss the history of the resume and current outdated resume practices. You’ll even learn how to hire the best applicant every time — without a resume or even an interview — in seconds thanks to Sprockets’ hiring solution.

History of the Resume

The exact origin of the first resume is unknown, yet historians have substantial evidence to credit Leonardo DaVinci in 1482. He sent a handwritten letter outlining his abilities and experience for an engineering job to Ludovico Sforza. Although he did not actually get the position, his handwritten letter had a lasting impression on Sforza, who later became the Duke of Milan and commissioned DaVinci’s painting, The Last Supper. Fast forward 540 years later… why are we still following in the painter’s footsteps when we have technology at our disposal? In case you’re still not convinced, here are three more reasons why resumes are impractical.

Owners and operators simply don’t have enough time to review a resume. Businesses are severely understaffed, so their eight-hour days can often turn into grueling twelve-hour ones. Some owners are even working the cash register or flipping burgers in a desperate attempt to cover for employees who don’t show. They barely have enough time to focus on their regular responsibilities. The last thing they want to do is sift through piles of paperwork.

Unfortunately, some people claim to have certain skills or experience on their resume that they actually do not have. Approximately 40% of workers have lied or stretched the truth on their resume. That number is too high to base a hiring decision solely on a resume.

3. They Leave too Much Room for Potential Bias

The average recruiter only spends six to seven seconds on a resume. These hasty decisions often lead to first impression bias, the leading cause of hiring errors. Unfortunately, that means many resumes are ignored or thrown away simply because of the name at the top. One study even showed that minority applicants who changed certain details of their resumes to make them seem more “white” received more interviews. It doesn’t have to be this way.

Additionally, the resume fails to provide employers with a full picture of an applicant. It does not cover one’s soft skills, which are equally, if not more important than a job seeker’s previous experience.

One popular option is to use LinkedIn as an online “resume.” In fact, 87% of recruiters find LinkedIn most effective when looking for potential hires. These profiles mimic traditional resumes, yet provide a more personalized touch. Job seekers can feature past experiences, skills, projects, published works, and more. LinkedIn profiles are easily skimmable and employers can filter potential hires based on certain keywords such as workplace skills or job titles. While many recruiters find LinkedIn effective, people can still lie about their skills or face potential bias.

Sprockets’ hiring platform, on the other hand, redeuces potential bias and increases your chances of making the right hires. You’ll spend 37% less time on the solution that predicts applicant success with pinpoint precision. Our platform eliminates the need for resumes and even interviews. It’s proven to boost employee retention by an average of 43%. In fact, top brands like Chick-fil-A and Taco Bell trust our sophisticated, yet easy-to-use technology to accurately reveal which applicants will succeed and stay long-term.

Get Back Hours in Your Day 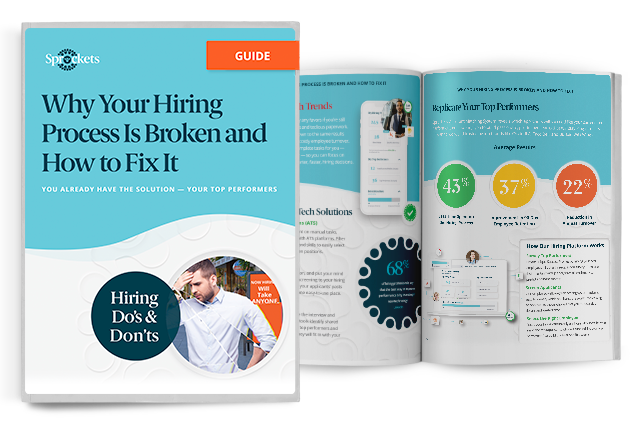