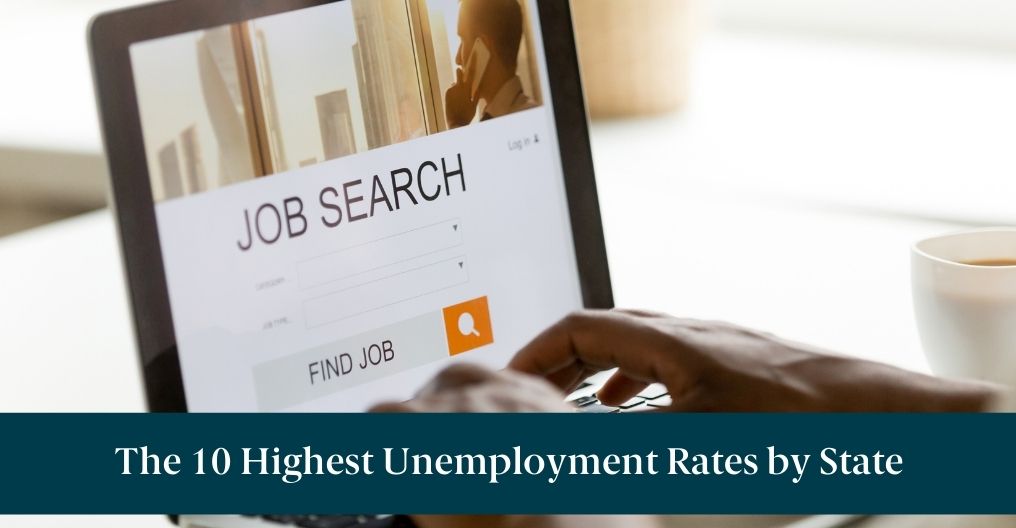 The 10 Highest Unemployment Rates by State

Studying the unemployment rate by state midway through 2021 reveals which parts of the country are poised for economic recovery in a post-pandemic era. This can prove beneficial to both job seekers and business owners, especially while we’re in the midst of a labor crisis. The following list consists of states with the highest unemployment rates in America, according to April 2021 data from the U.S. Bureau of Labor Statistics.

Even though Hawaii had the highest unemployment rate of any U.S. state in April 2021 at 8.5%, it was a considerable decline from the previous September when the figure spiked to 15%. Chief Economist Eugene Tan of the Hawaii Department of Business, Economic Development, and Tourism predicts the state will return to normal unemployment levels by November 2021. The state economy relies heavily on its tourism industry, which is expected to recover during the summer.

The Golden State’s reopening for business on June 15 is expected to mark the beginning of a speedy recovery. Over 2.7 million jobs were lost in the state between March and April 2020. By the following April, 1.58 million Californians were still unemployed. Although the state has 11.8% of America’s workforce, it accounts for over 14% of jobless claims in the nation.

New York state lost over 2 million jobs during the pandemic, but jobs are steadily returning in 2021. However, unemployment remains exceptionally high in New York City at over 11%. The worst period of joblessness, though, for the nation’s most populated city, was in 2020 at 15.5%. Tourism and hospitality were the industries most impacted by shutdowns.

One key reason why COVID-19 shutdowns have drastically affected New Mexico is that the state doesn’t have a high percentage of large corporations that employ thousands of workers. However, since the state has a relatively small and sparse population, only 78,000 residents were unemployed in April 2021. Some officials believe the state’s unemployment benefits are so comfortable that many people don’t want to return to work.

As far as job declines in the first half of 2021, Connecticut has suffered the worst, losing 9.7 percent of its workforce from February through April. That equates to a loss of about 188,000 jobs in a state that has had a minimal drop in its unemployment rate since the pandemic began. Overall, Connecticut’s workforce slid from 1.9 million to 1.6 million people over the past year.

Since Nevada is a large state with a small population, its high unemployment rate is somewhat of a mirage driven by thousands of lost jobs in Las Vegas, the state’s only major metropolitan area. The gambling destination had an unemployment rate of nearly 12% in November 2020, while the state’s overall jobless rate stood at 6.8% by the end of the year. At that point, 1.35 million of the state’s 1.48 million workers had jobs. Potential areas for growth areas that will help the states’ recovery process are mining, logging, business services, manufacturing, and construction.

Similar to other states with popular tourist attractions, New Jersey has been hit hard by travel shutdowns, particularly in the hospitality industry. Traditionally, it’s been a commuter state as well, with many residents crossing the state line to work in New York City. New Jersey’s beaches and casinos usually attract heavy tourism in the summer, which will be a key indicator this year for the state’s turnaround. Prior to the pandemic, the Garden State had an unemployment rate of 3.2%, while the national figure was 3.7%.

One of Pennsylvania’s main problems with unemployment is that many small businesses, including restaurants, can’t find workers to fill jobs. Employers believe the extra $300 per week federal pandemic benefits have slowed down unemployed people’s ambitions to return to work, resulting in a massive labor shortage. Consequently, business leaders will likely put pressure on lawmakers to end the moratorium in which individuals must prove they are looking for work to receive unemployment compensation.

Louisiana is trying to lower its high jobless rate by encouraging people to get back to work and discontinuing federal handouts. While 25 Republican governors in the country had made plans to cut federal unemployment benefits by June 2021, John Bel Edwards of Louisiana became the first Democratic governor to join them. States may continue receiving funds from the federal program until September 6, 2021, to pay unemployed individuals an additional $300 per week.

As one of the worst-stricken states for job losses throughout the pandemic, Illinois’ unemployment rate soared as high as 16.4% in April 2020. By December, the rate had fallen to 7.6% and has continued to decrease. Nearly one million people in the state were unemployed in April 2020, but a year later, the number dropped to around 438,000. 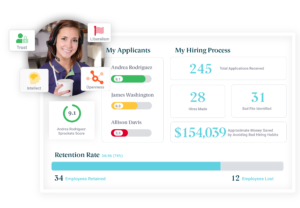 When we analyze the state-by-state unemployment rate, we get a clearer picture of how the pandemic shutdowns have affected jobs and certain industries. Nevertheless, signs of economic recovery are evident across the nation, and Sprockets can help businesses achieve healthy staffing levels once again.

Sprockets augments sourcing via free job postings ($400 value) and reveals which applicants are the ideal fit for your team. The AI-powered platform empowers you to hire the perfect candidates every time, ultimately improving employee retention and allowing operators to focus on important daily tasks rather than dealing with an endless cycle of turnover.

Schedule a free demo today to jumpstart your business’s recovery in the post-pandemic era.

Hire the Best Applicants
Login to Sprockets
Reset Password
Enter the username or e-mail you used in your profile. A password reset link will be sent to you by email.